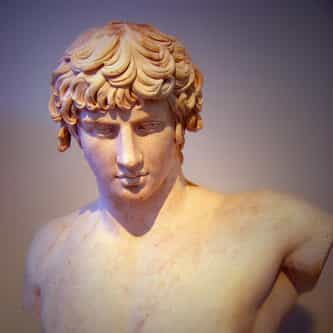 Antinous (also Antinoüs or Antinoös; Ancient Greek: Ἀντίνοος; 27 November, c. 111 – before 30 October 130) was a Bithynian Greek youth and a favourite or beloved of the Roman emperor Hadrian. He was deified after his death, being worshiped in both the Greek East and Latin West, sometimes as a god (theos) and sometimes merely as a hero (heros).Little is known of Antinous' life, although it is known that he was born in Claudiopolis (present day Bolu, Turkey), in the Roman province ... more on Wikipedia

Antinous IS LISTED ON