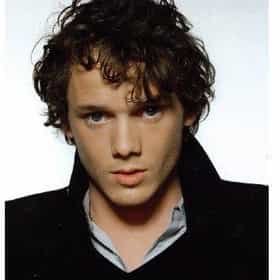 Anton Viktorovich Yelchin (Russian: Анто́н Ви́кторович Е́льчин, IPA: [ɐnˈton ˈjelʲtɕɪn]}; March 11, 1989 – June 19, 2016) was an American actor. He played Pavel Chekov in three Star Trek films: Star Trek (2009), Star Trek Into Darkness (2013), and the posthumously released Star Trek Beyond (2016). Born to a Russian Jewish family in Leningrad, Yelchin and his family moved to the United States when he was a baby. In the late 1990s, Yelchin began appearing in television and film roles. His role in Steven Spielberg's miniseries Taken helped further his career. Yelchin also starred in Huff, the films Hearts in Atlantis, Alpha Dog, and Like Crazy, and the posthumously released Trollhunters. ... more on Wikipedia

Anton Yelchin is ranked on...

#591 of 1,151 The Best Actors in Film History 2.2M VOTES The best actors ever are ranked here in this list of the best actors in film history. These are the greatest actors ever to ...
#419 of 931 People We Wish Were Still Alive 3.2M VOTES RIP to our world's greatest achievers, those who changed the way we live and the ways we thought. This list of people we wis...
#70 of 311 Which Actor Would You Bring Back for One Final Movie? 183.4k VOTES We asked, you answered. Fans of the Ranker Facebook page chose which dead actors they’d like to bring back to life for just ...
#24 of 36 The Weirdest Statues of Celebrities 11.3k VOTES Humans have used statues to memorialize their leaders for thousands of years. A statue immortalizes a mortal, ensuring that ...
Child Actors Who Tragically Died Young 38.4M VIEWS Child actors who died young include some of the most recognizable names in entertainment. All the actors and actresses liste...
People Who Died from Catastrophic Car Malfunctions 17.2k VIEWS When you buy a car, you expect it to be safe. Unfortunately, many motorists have discovered mechanical faults and failures o...
Actors and Actresses Who Died in 2016 778.2k VIEWS   Car accidents, drug overdoses, and other surprising deaths make up the bulk of the actors and actresses who died to...
16 Famous People With Cystic Fibrosis 143.7k VIEWS Cystic fibrosis is an autosomal recessive genetic disorder that affects the lungs, pancreas, liver, and intestines. The...
Famous People Named Anton 2.8k VIEWS Ever thought about how many famous people named Anton are out there? This list of celebrities named Anton will show you th...

Anton Yelchin is also found on...