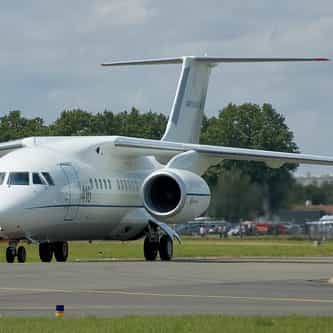 The Antonov An-148 is a regional jet aircraft designed by the Ukrainian Antonov company and produced by Antonov itself and also on outsource by Russia's Voronezh Aircraft Production Association. Development of the plane was started in the 1990s, and the maiden flight took place on 17 November 2004. The plane completed its certification programme on 26 February 2007. The An-148 has a maximum range of 2,100–4,400 kilometers and is able to carry 68–85 passengers, depending on the ... more on Wikipedia