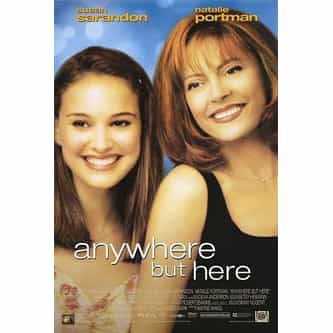 Anywhere but Here is a 1999 American dramatic film, based on the novel of the same name by Mona Simpson. The screenplay was written by Alvin Sargent, and the film was directed by Wayne Wang. It was produced by Laurence Mark, Petra Alexandria, and Ginny Nugent. It stars Susan Sarandon and Natalie Portman. Filming began in late June 1998. It debuted at the Toronto Film Festival on September 17 in 1999, before being released on November 12. ... more on Wikipedia

Anywhere but Here IS LISTED ON