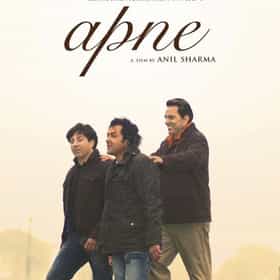 Apne is a 2007 Bollywood sports drama film directed by Anil Sharma. This is the first and one of the three films to feature real life father and sons Dharmendra, Sunny Deol and Bobby Deol together. Sunny and Bobby had worked together before in Dillagi and Dharmendra and Sunny had also appeared together in Sultanat and Kshatrya. Kiron Kher, Shilpa Shetty and Katrina Kaif play the female leads. The film opened to an excellent response across India and emerged as a hit overseas as well. Dharmendra plays the role of a disgraced ex-boxer Baldev Chaudhary who tries to wash a stain in his boxing career through his sons Angad and Karan. Dharmendra had played the role of a boxer in the film ... more on Wikipedia

Apne is ranked on...

Apne is also found on...

Movies Produced by Dharmendra Deol, Producer List of All Movies Released in 2007