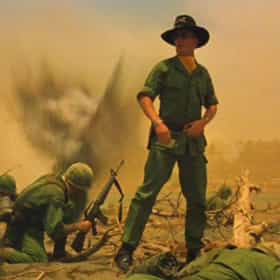 Apocalypse Now is a 1979 American epic adventure war film set during the Vietnam War. Produced and directed by Francis Ford Coppola and starring Marlon Brando, Martin Sheen, and Robert Duvall. The film follows the central character, U.S. Army special operations officer Captain Benjamin L. Willard, of MACV-SOG, on a mission to take out the renegade and presumed insane U.S. Army Special Forces Colonel Walter E. Kurtz. The screenplay by John Milius and Coppola updates the setting of Joseph Conrad's novella Heart of Darkness to that of the Vietnam War era. ... more on Wikipedia

The Behind The Scenes Madness Of 'Apocalypse Now' Was Even More Hellish Than You Thought 77k views While metaphorical battles often occur during the act of creation, the making of Apocalypse Now was about as close to a real...
Behind-The-Scenes Stories About Marlon Brando In 'Apocalypse Now' 4.1k views Though it's widely considered one of the greatest American movies ever made, Apocalypse Now is perhaps best-known for its tu...
Apocalypse Now Movie Quotes 177 votes Here are the best Apocalypse Now quotes, with movie clips, ranked by fans. This list of great movie quotes from Apocalypse N...

Apocalypse Now is ranked on...

Apocalypse Now is also found on...