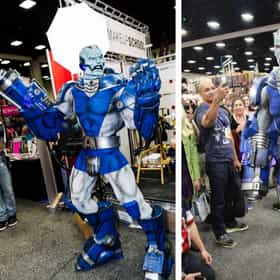 Apocalypse, also known as En Sabah Nur or "The First One", is a fictional supervillain that appears in American comic books published by Marvel Comics. He is an immortal mutant and is usually portrayed as one of the main antagonists of the X-Men. Created by writer Louise Simonson and artist Jackson Guice, Apocalypse first appeared in X-Factor #5. Since his introduction, the character has appeared in a number of X-Men titles including spin-offs and several limited series. The character has also been featured in associated Marvel merchandise including animated television series, feature films, toys, trading cards, and games. He is portrayed by Brendan Pedder in the 2014 film ... more on Wikipedia

Apocalypse is ranked on...

#8 of 110 People who voted for Apocalypse... also upvote Wolverine on The Best Comic Book Superheroes of All Time also upvote Wolverine on The Greatest Marvel Avengers Characters of All Time The Greatest Marvel Villains & Enemies Ever 405.8k VOTES The best Marvel villains are the men and women (not to mention any aliens, robots, and even siblings of heroes) at the root ...
#18 of 80 The Greatest Avengers Villains of All Time 64.5k VOTES The Hulk, Iron Man, and Thor had been fighting crime separately in the pages of Marvel Comics, each having their own share o...
#9 of 63 The Best Wolverine Villains Ever 18.8k VOTES List of Wolverine's most infamous foes, ranked by the fans. For a little Canadian guy, Wolverine sure has a lot of enemies a...
#3 of 54 The Best Villains Deadpool Has Ever Faced 27.7k VOTES The Merc with a Mouth, or Deadpool, was created in 1991 by writer Fabian Nicieza and comic illustrator Rob Liefeld. Though D...
#11 of 11 X-Men Characters Who Should be Rebooted On The Silver Screen 2.3k VOTES X-Men characters have been starring in movies since long before the Marvel Cinematic Universe (MCU), but that's not the...
#3 of 35 Cosplayers Who Stepped Right Out of the Comics 79.9k VOTES Fans across the globe migrate to San Diego each year for Comic-Con. But only the bravest of fans spend countless hours const...
#31 of 69 The Best X-Men Characters of All Time 90.8k VOTES   Comics legends Stan Lee and Jack Kirby brought the X-Men to life in X-Men #1 back in 1963. The X-Men...
#14 of 162 The Most Powerful Comic Book Characters Ever, Ranked 132.2k VOTES The problem with ranking the most powerful characters in the history of comic books is that writers always want to top the t...
#11 of 28 The Most Terrifying & Scariest Villains In Comics 58.2k VOTES Does the Scarecrow bring the fear out of you? Does the thought of Venom being around you make you cringe? Does Batman's Vict...
#27 of 29 The Best Blue Characters 1.7k VOTES We’re ranking the best blue characters of all time. From Road Runner to Woody Woodpecker, Papa Smurf, and Dory, this list fe...
#19 of 29 The Best '90s Superhero Cartoon Voice Over Actors 9.3k VOTES Voice acting may be the most important element of a successful animated show, and though the voice acting in superhero car...
List of All Hulk Villains & Enemies 129.3k VIEWS This is a full list of all Hulk enemies and supervillains that has ever existed. The following Hulk enemy list can be sorted...
What Nerdy Fictional Villain Would You Be Based On Your Zodiac? 5.9k VIEWS Your horoscope is a beautiful and powerful thing, but it also has a dark side. While you can use the zodiac to figure out wh...