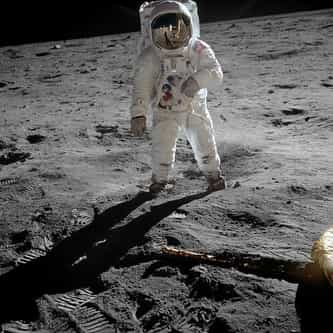 Apollo 11 was the spaceflight that landed the first humans on the Moon, Americans Neil Armstrong and Buzz Aldrin, on July 20, 1969, at 20:18 UTC. Armstrong became the first to step onto the lunar surface six hours later on July 21 at 02:56 UTC. Armstrong spent about two and a half hours outside the spacecraft, Aldrin slightly less, and together they collected 47.5 pounds of lunar material for return to Earth. The third member of the mission, Michael Collins, piloted the command spacecraft ... more on Wikipedia

23.2k readers Read The Transcript Nixon Prepared In Case Neil Armstrong And Buzz Aldrin Got Stranded On The Moon

22.2k readers The Full Story Of How Neil Armstrong Changed History When He Walked On The Moon

1M readers Yes, We Really Landed On The Moon And Simple Science Debunks All The "Evidence" Of A Conspiracy

89.6k readers A Breakdown Of The Conspiracy Theory That The Moon Landing Was Faked

16.4k readers How The Moon Landing Directly Shaped The Way We Live Now

1.7k readers Here's What Newspapers Around The World Looked Like The Day After The Moon Landing

Apollo 11 IS LISTED ON

#5 of 15
16.2k VOTES Historical Events You Most Want To Go Back and See
25.1k VIEWS All 12 Manned Apollo Missions... and What Happened!
220.6k VIEWS The Most Widely Believed Conspiracy Theories in US History
61.1k VIEWS The 10 Most-Watched Events In Television History