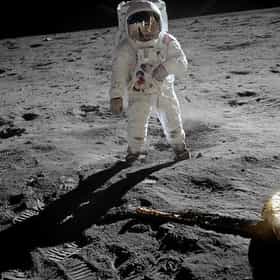 Apollo 11 was the spaceflight that landed the first humans on the Moon, Americans Neil Armstrong and Buzz Aldrin, on July 20, 1969, at 20:18 UTC. Armstrong became the first to step onto the lunar surface six hours later on July 21 at 02:56 UTC. Armstrong spent about two and a half hours outside the spacecraft, Aldrin slightly less, and together they collected 47.5 pounds of lunar material for return to Earth. The third member of the mission, Michael Collins, piloted the command spacecraft alone in lunar orbit until Armstrong and Aldrin returned to it just under a day later for the trip back to Earth. Launched by a Saturn V rocket from Kennedy Space Center in Merritt Island, Florida, on ... more on Wikipedia

The Full Story Of How Neil Armstrong Changed History When He Walked On The Moon 19.7k views Neil Armstrong made history on July 20, 1969, by becoming the first man on the moon, but he didn't brag about his experience...
How The Moon Landing Directly Shaped The Way We Live Now 13.2k views Anyone who was alive to witness it happen on live TV in 1969 knows how the moon landing changed history in an instant: for t...
A Breakdown Of The Conspiracy Theory That The Moon Landing Was Faked 86.8k views The 1969 moon landing, accomplished by the United States of America and watched by the entire world, is one of the most icon...
Read The Transcript Nixon Prepared In Case Neil Armstrong And Buzz Aldrin Got Stranded On The Moon 18.9k views The phrase “Nixon Moon Landing Death Speech” sounds like the beginnings of a conspiracy theory, but it’s a real piece of Apo...
Here's What Newspapers Around The World Looked Like The Day After The Moon Landing 706 views There are certain moments in history that warrant notice across the globe and the Apollo 11 moon landing was one of them. Ne...
The Best First Man Quotes 156 votes These First Man quotes are all from the film that follows Neil Armstrong and the men of Apollo 11, as they prepare to be the...
Yes, We Really Landed On The Moon And Simple Science Debunks All The "Evidence" Of A Conspiracy 203.1k views NASA is not lying to you about the Moon landings; the Apollo missions really did land on the lunar surface, and there is an ...
People Describe Where They Were When We Landed On The Moon 599 views When Neil Armstrong and Buzz Aldrin launched into space on July 16, 1969, they had no guarantee that they would make it all ...

#4 of 15 Historical Events You Most Want To Go Back and See 14.6k VOTES Every history buff has considered the historical events they would want to witness—from the construction of the pyramids to ...
The Most Widely Believed Conspiracy Theories in US History 219.4k VIEWS Conspiracy theorists: Call them birthers, deathers or conspiracists. There are many, people who buy into these popular ...
All 12 Manned Apollo Missions... and What Happened! 24.5k VIEWS Between 1961 and 1975, NASA conducted the Apollo program. It was badass and included 12 manned Apollo missions and six moon ...
The 10 Most-Watched Events In Television History 18.7k VIEWS Getting millions or even billions of people around the world to do the same thing at the same time is no small fea...