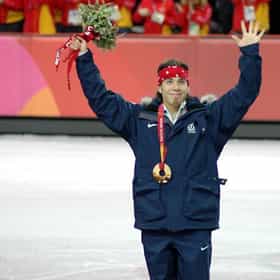 Apolo Anton Ohno (; born May 22, 1982) is an American retired short track speed skating competitor and an eight-time medalist (two gold, two silver, four bronze) in the Winter Olympics. Ohno is the most decorated American Olympian at the Winter Olympics. Raised by his father, Ohno began training full-time in 1996. He has been the face of short track in the United States since winning his medals at the 2002 Winter Olympics. At the age of 14, he became the youngest U.S. national champion in 1997 and was the reigning champion from 2001–2009, winning the title a total of 12 times. In December 1999, he became the youngest skater to win a World Cup event title, and became the first American ... more on Wikipedia

Apolo Ohno is ranked on...

#6 of 25 People who voted for Apolo Ohno... also upvote James Bond Franchise on Every James Bond Movie, Ranked Best to Worst also upvote X-Men Franchise on The Best Marvel Comics Movies The Best 'Dancing with the Stars' Winners of All-Time 14.3k VOTES After checking out the votes for the best DWTS Season 28 contestants, check out this complete list of Dancing with...
#58 of 113 The Best Short Male Athletes 7k VOTES The best short male athletes include World Series champions, Super Bowl winners, Stanley Cup hoisters and Olympic gold medal...
#83 of 99 The Dumbest Professional Athletes 45.9k VOTES The dumbest professional athletes might not be the least intelligent athletes overall, but each is responsible for at least ...
#51 of 101 Athletes Who Spark the Most Fan Arguments 68.8k VOTES A list of athletes who are passionately loved and hated by sports fans. These divisive, controversial sports stars inspire b...
#12 of 96 The Best Athletes of 2011 4.8k VOTES Whether they led your favorite team to a championship or helped a rival team eliminate yours from the playoffs, the best ath...
#9 of 204 The Best Olympic Athletes from United States Of America 4.4k VOTES List of the greatest Olympic athletes from United States of America, with photos when available. These are the best United S...
Famous People Of Japanese Descent 256.7k VIEWS Several well-known movers and shakers are of Japanese ancestry. Some celebs were born overseas, and others are third- and fo...
33 Celebrities Who Ran the New York Marathon 7.8k VIEWS The New York Marathon is a 26.2 mile course that weaves through the five boroughs of the Big Apple. Several celebrities have...
#8 of 27 The Best Sports Illustrated Covers 3.4k VOTES List of the most memorable Sports Illustrated Magazine covers, featuring the coolest photographs, sexiest celebrity shots,...
#1 of 128 The Best Olympic Athletes in Short Track Speed Skating 732 VOTES List of the best short track speed skating Olympic athletes of all time, with photos of the athletes when available. The fam...

Apolo Ohno is also found on...