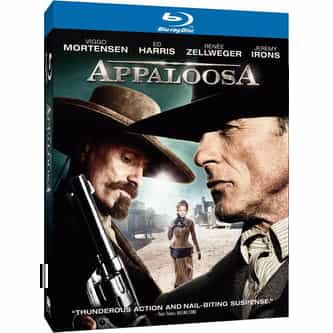 Appaloosa is an American western based on the 2005 novel, Appaloosa, by writer Robert B. Parker. Directed by Ed Harris and co-written by Harris and Robert Knott, Appaloosa stars Harris alongside Viggo Mortensen, Renée Zellweger and Jeremy Irons. The film premiered in the 2008 Toronto International Film Festival and was released in selected cities on September 19, 2008, then expanded into wide-release on October 3, 2008. The movie shares some narrative similarities with the 1959 ... more on Wikipedia

Appaloosa IS LISTED ON