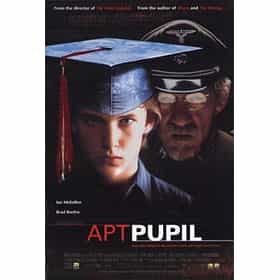 Apt Pupil is a 1998 American thriller film directed by Bryan Singer and starring Ian McKellen and Brad Renfro. It is based on the 1982 novella of the same name by Stephen King. In the 1980s in southern California, high school student Todd Bowden discovers fugitive Nazi war criminal Kurt Dussander living in his neighborhood under the pseudonym Arthur Denker. Bowden, obsessed with Nazism and acts of the Holocaust, persuades Dussander to share his stories, and their relationship stirs malice in each of them. The novella was first published in King's 1982 collection Different Seasons. Producer Richard Kobritz sought to adapt the novella into a film during the 1980s, but two actors he ... more on Wikipedia

Apt Pupil is ranked on...

Apt Pupil is also found on...