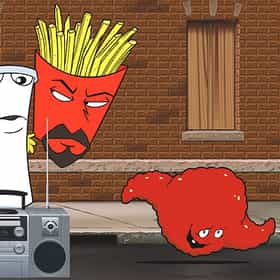 Aqua Teen Hunger Force is an American animated television series created by Dave Willis and Matt Maiellaro for Cartoon Network's late night programming block, Adult Swim. The pilot episode aired on Cartoon Network unannounced on December 30, 2000 as a sneak peek; the series later moved to Adult Swim and made its official debut on September 9, 2001. The show is about the surreal adventures and antics of three anthropomorphic fast food items: Master Shake, Frylock and Meatwad, who live together as roommates and frequently interact with their human next-door neighbor, Carl Brutananadilewski. Aqua Teen Hunger Force is one of the spin-offs of Space Ghost Coast to Coast, and as of 2015, the ... more on Wikipedia

#262 of 477 People who voted for Aqua Teen Hunger Force... People Age 30 to 49 are 2x more likely to vote for this also upvote Monty Python and the Holy Grail on The Absolute Most Hilarious Movies Ever Made The Greatest Animated Series Ever Made 645k VOTES The top animated series of all time include some of the best TV shows ever to flicker in your living room (or on your comput...
#172 of 717 The Best Cartoons of All Time 3M VOTES There have been many fantastic animated TV shows throughout the history, but which ones are the best? Some people think that...
#240 of 296 The Greatest Sitcoms in Television History 959.9k VOTES Best sitcoms ever to air on television includes some of the greatest sitcoms of all time as ranked by fans of TV. What's the...
#348 of 391 TV Shows That Only Smart People Appreciate 1.3M VOTES Since about the early 2000s, TV audiences have been blessed with what many experts call The Golden Age of Television. In oth...
#41 of 169 The TV Shows Most Loved by Hipsters 29.1k VOTES List of TV shows hipsters love, currently running and from the past. Perhaps a TV-watching hipster seems like an oxymoron; a...
#269 of 482 The Funniest TV Shows of All Time 538.5k VOTES   The funniest TV shows ever range from some of the best TV shows of recent memory to some of the best TV shows of al...
#96 of 281 The Best Cult TV Shows of All Time 220.4k VOTES List of the best cult TV shows ever, ranked by their loyal fans. TV series that develop cult followings are known for their ...
#50 of 134 The Funniest Shows To Watch When You're Stoned 9.4k VOTES Getting high and watching television go hand-in-hand, but finding the perfect show to watch while getting your smoke on can ...
#14 of 50 What to Watch If You Love 'Archer' 699 VOTES Archer is a genre-defining action-packed animated series filled with comedy gold that garnered the love and affection o...
#35 of 44 What to Watch If You Love 'Family Guy' 112 VOTES Family Guy is an animated comedy that garnered the love and affection of hordes of fans, but if you’ve finished watching the...
#18 of 58 The Best Animated Series of the 2010s, Ranked 52k VOTES These are the best 2010s cartoons and animated series, ranked from best to worst by user votes. The decade was truly a great...
#38 of 121 The Best Dark Comedy TV Shows 35.2k VOTES Do you like your comedy a little darker? This is a list of the very best dark comedy shows on television, ranked from best t...
#31 of 59 The Best TÉLÉTOON TV Shows 2.5k VOTES List of popular Teletoon shows, ranked from best to worst. This list of the top current and cancelled Teletoon TV series inc...