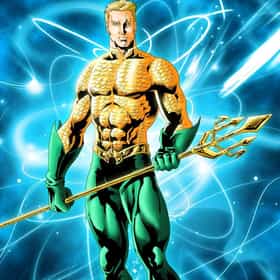 Aquaman is a fictional superhero appearing in American comic books published by DC Comics. Created by Paul Norris and Mort Weisinger, the character debuted in More Fun Comics #73. Initially a backup feature in DC's anthology titles, Aquaman later starred in several volumes of a solo title. During the late 1950s and 1960s superhero-revival period known as the Silver Age, he was a founding member of the Justice League of America. In the 1990s Modern Age, Aquaman's character became more serious than in most previous interpretations, with storylines depicting the weight of his role as king of Atlantis. Later accounts reconciled both facets of the character, casting Aquaman as serious and ... more on Wikipedia

Captain Marvel
20 Aquaman Jokes, Because He Sucks 29.9k votes Aquaman jokes come in every way, shape, and form. From funny comics about Aquaman, to the best Aquaman webcomics ever, but e...
'Aquaman' Moments You Definitely Won't See In The Movie 917 votes Aquaman's days as the garishly clad laughingstock of DC are over, ushered out by several disturbing stories likely to disapp...
It's Time To Stop Making Fun Of Aquaman 2.7k votes Look, all of you nerds have made Aquaman jokes in the past. We've all laughed at the Robot Chicken skits about Aquaman. Hell...
Aquaman's All Time Most Notorious Villains 2.5k votes While Aquaman may not be known for having as infamous a rogues gallery as Batman or the Flash, since his appearance in 1941,...
Everything You Need To Know About Mera, Queen Of Atlantis And Aquaman's Wife 6.6k views Who is Mera? The answer may elude all but the most enthusiastic DC comic fans. In the comics, Mera is Aquaman's wife, the Qu...
The Best Aquaman Storylines In Comics 684 votes The character Aquaman was first introduced to readers in More Fun Comics #73 all the way back in 1941. Since that time, DC h...
Here Are All The Characters In 'Aquaman' That You've Never Seen Before 2.6k views Followers of DC Comics and the DC Extended Universe know about Aquaman, the pivotal member of the Justice League who often f...
The First Social Media Reactions To 'Aquaman' Just Surfaced Online 297 views When Warner Bros. tapped acclaimed horror director James Wan to helm the 2018 standalone Aquaman film, audiences were curiou...

Aquaman is ranked on...

#30 of 319 People who voted for Aquaman... also upvote Superman Franchise on The Best Superhero Movies Ever Made also upvote Batman Franchise on The Best Superhero Movies Ever Made The Best Comic Book Superheroes of All Time 1.7M VOTES List of the most badass, tough, and iconic comic book superheroes ever created. This list includes central characters from b...
#7 of 92 The Best Members of the Justice League and JLA 122.1k VOTES Many heroes have been a part of DC's most famous superhero team since its inception in the 60s, but who are the best members...
#9 of 24 The Hottest Male Comic Book Characters 60.3k VOTES The hottest comic book men, as voted on by comic lovers around the world. From superheroes to supervillains, these are the s...
#20 of 29 The Best Comic Characters To Have On Your Apocalypse Team 9k VOTES A solar flare has erupted from the sun causing a massive, worldwide EMP blast. At the same time, a massive tidal wave takes ...
#4 of 31 The Best Superhero Evolution on Film 36.1k VOTES As the studios keep cranking out superhero film after superhero film things change. Drastically. Whether it's technological...
#24 of 55 The Most Ridiculous Superheroes Ever 63.6k VOTES Ridiculous comic book superheroes come in all shapes and sizes. And these are the characters voted by many to be the most ri...
#2 of 23 Half-Human Hybrid Heroes 1.5k VOTES Marvel’s Star-Lord rocketed from obscurity into worldwide stardom, in part due to the popularity and uniqueness of hybr...
#13 of 16 Funko Pops That Actually Look Like The Characters 261 VOTES When people think of Funko Pops, they think of the array of pop culture characters and real-life celebrities immortalized in...
#17 of 23 The Most Overpowered Superheroes 2.6k VOTES There are a lot of superheroes who are strong, but what about the ones who are too strong? When you think about it, someone ...
#8 of 20 The Best Superhero Mentors 883 VOTES Listen and learn as we rank the greatest superhero mentors in comic history. Most of these mentors are known for helpin...
#7 of 15 The 15 Best Superheroes With Enhanced Senses 292 VOTES Superheroes with enhanced senses have abilities that far exceed the senses of any normal man or woman. While some heroes enj...
#12 of 20 The 20 Most Powerful Telepaths, Ranked 1.3k VOTES Not to be confused with telekinesis, superheroes with the power of telepathy are able to read people’s minds and, in some ca...
Which Justice League Member Are You Based On Your Zodiac? 126.2k VIEWS DC Comics fans all have their faves when it comes to the League's members - each superhero has powers and traits that may re...
Which Superhero Are You, Based On Your Zodiac Sign? 273.9k VIEWS Forget about lions, fish, and scorpions when it comes to reading your horoscope. Let's face it, you're a nerd - and as a ner...
Top 100 Most Popular Superheroes and Villains in Comic Books 116.1k VIEWS These are the superhero (and villain) characters who have been in the most individual issues of comic books, including ...

Aquaman is also found on...