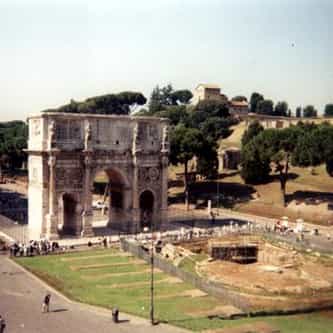 The Arch of Constantine is a triumphal arch in Rome, situated between the Colosseum and the Palatine Hill. It was erected by the Roman Senate to commemorate Constantine I's victory over Maxentius at the Battle of Milvian Bridge on October 28, 312. Dedicated in 315, it is the latest of the existing triumphal arches in Rome, and the only one to make extensive use of spolia, re-using several major reliefs from 2nd century imperial monuments, which give a striking and famous stylistic contrast ... more on Wikipedia

Arch of Constantine IS LISTED ON