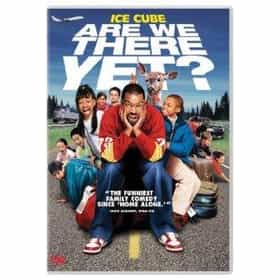 Are We There Yet? is a 2005 American/Canadian road family comedy film directed by Brian Levant and starring Ice Cube. It was produced by Revolution Studios and distributed by Columbia Pictures. Although it was panned by critics, it grossed $82 million in North America alone and sold 3.7 million DVDs. The film, while set in Portland, Oregon, Vancouver, BC and other parts of the Pacific Northwest, was mostly shot on location in and around Vancouver, including a view of the Lions' Gate Bridge, the financial district skyscrapers and the downtown scene near the film's conclusion. A sequel, Are We Done Yet?, was released in 2007, and a television series featuring the film's main characters ... more on Wikipedia

Are We There Yet is ranked on...

Are We There Yet is also found on...