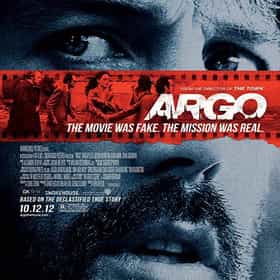 Argo is a 2012 American political thriller film directed by Ben Affleck. The film is adapted from U.S. Central Intelligence Agency operative Tony Mendez's book The Master of Disguise and Joshuah Bearman's 2007 Wired article The Great Escape: How the CIA Used a Fake Sci-Fi Flick to Rescue Americans from Tehran. The latter deals with the "Canadian Caper," in which Mendez led the rescue of six U.S. diplomats from Tehran, Iran, during the 1979-1981 Iran hostage crisis. The film stars Affleck as Mendez with Bryan Cranston, Alan Arkin, and John Goodman in supporting roles, and was released in North America to critical and commercial success on October 12, 2012. The film was ... more on Wikipedia

The True Story Behind The Movie 'Argo' 955 views Iran and the United States have a tumultuous relationship that remains in turmoil today. After the CIA helped install Shah M...
Argo Movie Quotes 205 votes "Argo" movie quotes capture the dialogue of the 2012 political thriller based on the true story of a daring hostag...

Argo is ranked on...

Argo is also found on...