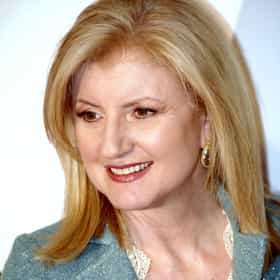 Arianna Stassinopoulos Huffington (born July 15, 1950) is a Greek-American author, syndicated columnist, and businesswoman. She is the founder of The Huffington Post, the founder and CEO of Thrive Global, and the author of fifteen books. In May 2005, she launched The Huffington Post, a news and blog site. In August 2016, she launched Thrive Global, a corporate and consumer well-being and productivity platform. She has been named to Time Magazine's list of the world’s 100 most influential people and the Forbes Most Powerful Women list. Originally from Greece, she moved to England when she was 16 and graduated from Girton College, Cambridge, where she earned a B.A. in economics. At 21, ... more on Wikipedia

Arianna Huffington is ranked on...

#104 of 322 The Most Inspiring (Non-Hollywood) Female Role Models 83.6k VOTES Who run the world? Girls! After compiling this list, we're positive that ladies all over the planet are kicking ass and ta...
#20 of 166 The Most Ridiculous Political Pundits 162.6k VOTES This is a bipartisan list of the most over-the-top, spittle-stained, fist-thumping, hyperbolic political pundits of all ti...
#50 of 267 The Most Powerful Women Of All Time 175.5k VOTES This is a list of the most powerful women of all time, as ranked by experts and by fans alike. From world leaders to celeb...
#12 of 12 Political Wives Who Overshadowed Their Husbands 1.7k VOTES Women who have overshadowed their politician husbands include some of the greatest women in political history as well as som...
#17 of 32 The Most Powerful People on Twitter 2.6k VOTES Who are the most powerful people on Twitter? Let's be clear: Having millions of followers, just because you are super-famous...
#52 of 57 Dream Presidential Debate Moderators 12.3k VOTES These dream presidential debate moderators might not ever get the chance to prove how awesome they would be at moderating pr...
#14 of 20 Celebrities on Google Plus 2k VOTES Of course there are celebrities on Google Plus, which quickly became the fastest-growing social network ever created, reachi...
Celebrities Turning 70 In 2020 1.8k VIEWS The list of 70 year old celebrities gains some famous faces in 2020. Celebs born in 1950 will be turning 70 years old next y...
20 Famous Insomniacs 291.6k VIEWS Wake up! It's time for a list of famous insomniacs, loosely ranked by fame and popularity. Insomnia is a chronic sleep disor...
#22 of 38 The Most Influential Contemporary Minds 863 VOTES With major threats to world stability like climate change, nuclear war, and mass extinction mounting, the world needs public...
42 Famous ENFPs 306.8k VIEWS Many famous actors, comedians and musicians are believed to be ENFPs (Extraverted Intuitive Feeling Perceiving). ENFPs are k...
Jerry Brown's Loves & Hookups 38.6k VIEWS All of Jerry Brown's past lovers and relationships are listed here. His current wife is Anne Gust but he's had many girlfrie...
Celebrities That Drive Hybrid Cars 9.5k VIEWS Celebrities that advocate for hybrid cars. These celebrity drivers get behind the wheel of hybrid vehicles. This is a list o...
2011 College Graduation Speakers 21.3k VIEWS We've compiled the most comprehensive list of commencement speakers for 2011 across all universities that we could put toget...

Arianna Huffington is also found on...