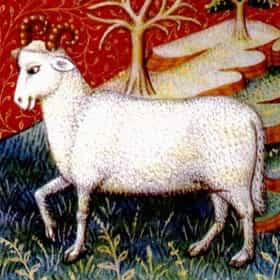 Aries is one of the constellations of the zodiac. It is located in the northern celestial hemisphere between Pisces to the west and Taurus to the east. The name Aries is Latin for ram, and its symbol is, representing a ram's horns. It is one of the 48 constellations described by the 2nd century astronomer Ptolemy, and remains one of the 88 modern constellations. It is a mid-sized constellation, ranking 39th overall size, with an area of 441 square degrees. Although Aries came to represent specifically the ram whose fleece became the Golden Fleece of Ancient Greek mythology, it has represented a ram since late Babylonian times. Before that, the stars of Aries formed a farmhand. ... more on Wikipedia

Famous Aries Male Celebrities 24.2k views Aries tend to have confidence and charisma to spare. Combined with their tendency to be bold in their choices, they have all...
Famous Aries Female Celebrities 66.7k views Aries tend to be charismatic people who are confident and bold in their choices - all qualities that give you an edge in you...
The 20 Best Aries Anime Characters Born March 21 - April 19 1.5k votes One fun thing about being an anime fan is that many characters come with canonically established birthdays. There are plenty...
Aries Tattoo Designs 9.8k votes This list of Aries tattoo designs contains ideas for those born under the headstrong sign, between March 21 to April 19. The...
Famous YouTubers Who Are Aries 311 votes On this list you’ll see Aries YouTubers, ranked by popularity. This list of famous Aries YouTubers - born between March 21 a...
25 Rappers Who Are Aries 1k views This list features famous Aries rappers ranked by fame and popularity. Passionate, confident, and driven, Aries have several...
50+ Famous Actors Who Are Aries 31 views Aries are passionate, bold, and ambitious, so it should come as no surprise that the below famous actors fall under that zod...
50+ Famous Singers Who Are Aries 20 views This list will act as your reference to all the famous Aries singers. Ever wonder which famous singers have an Aries zodiac ...