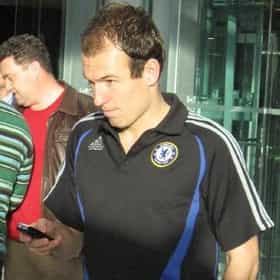 Arjen Robben (Dutch pronunciation: [ˈɑrjən ˈrɔbə(n)] (listen); born 23 January 1984) is a Dutch former footballer who played as a winger. He is known for his dribbling skills, speed, crossing ability and his accurate left foot long-range shots from the right wing, Robben was regarded as one of the best players in the world in his prime.Robben first came to prominence with Groningen, for whom he was player of the year for the 2000–01 Eredivisie season. Two years later he signed for PSV, where he became the Netherlands' Young Player of the Year and won an Eredivisie title. The following season Robben's signature was pursued by leading clubs, and after protracted transfer negotiations, he ... more on Wikipedia

Arjen Robben is ranked on...

Arjen Robben is also found on...