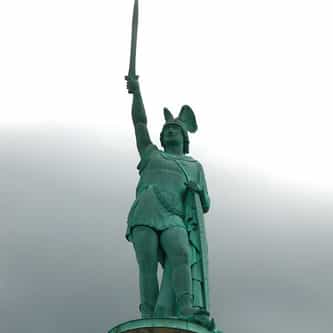 Arminius (German: Hermann; 18/17 BC – AD 21) was a chieftain of the Germanic Cherusci tribe who commanded an alliance of Germanic tribes at the Battle of the Teutoburg Forest in 9 AD, in which three Roman legions were destroyed. His victory at Teutoburg Forest would precipitate the Roman Empire's permanent strategic withdrawal from Magna Germania, and made a major contribution to the eventual fall of the Western Roman Empire. Modern historians have regarded Arminius' victory as Rome's ... more on Wikipedia

Arminius IS LISTED ON