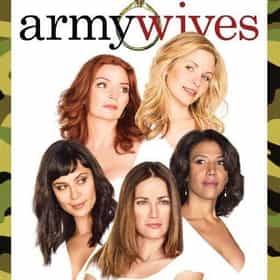 Army Wives is an American drama television series that follows the lives of four army wives, one army husband, and their families. The series premiered on Lifetime on June 3, 2007. The show had the largest series premiere in Lifetime's 23-year history, and the largest viewership in the 10:00 pm to 11:00 pm time slot since December 2007 for Lifetime. It received favorable reviews and several award nominations, and won five ASCAP Awards and one Gracie Allen Award. On September 21, 2012, the show was picked up for a thirteen-episode seventh and final season to air in 2013. In November 2012, it was confirmed that Season 6 main cast members Catherine Bell, Wendy Davis, Terry Serpico, Brian ... more on Wikipedia

Army Wives is ranked on...

#42 of 50 What's The Most Famous TV Show Set In Every State? 22.7k VOTES Some shows, like Hawaii Five-O, are inextricably linked to the states in which they're set. Others have seemi...
#63 of 123 TV Shows with the Hottest Casts 183.2k VOTES List of TV shows with the hottest casts. This list of the sexiest ensembles on television includes popular primetime dramas ...
#41 of 49 What to Watch If You Love 'NCIS: Los Angeles' 124 VOTES NCIS: Los Angeles kept viewers on the edge of their seats with nail-biting undercover investigations important for national ...
#34 of 74 The Best Military TV Shows 60.1k VOTES The very best military shows on television, ranked from best to worst. This list of the greatest military shows also include...
#16 of 29 The Best 2000s Military TV Shows 4.6k VOTES The best 2000s military TV shows come in many forms. Some top '00s military series are dramas, and other good 2000s military...