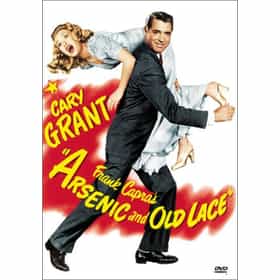 Arsenic and Old Lace is a 1944 American dark comedy film directed by Frank Capra, starring Cary Grant, and based on Joseph Kesselring's play Arsenic and Old Lace. The script adaptation was by Julius J. Epstein and Philip G. Epstein. Capra actually filmed the movie in 1941 because of star Cary Grant's availability, but it was not released until 1944, after the original stage version had finished its run on Broadway. The lead role of Mortimer Brewster was originally intended for Bob Hope, but he could not be released from his contract with Paramount. Capra had also approached Jack Benny and Ronald Reagan before learning that Grant would accept the role. Boris Karloff played Jonathan ... more on Wikipedia

Arsenic and Old Lace is ranked on...

Arsenic and Old Lace is also found on...