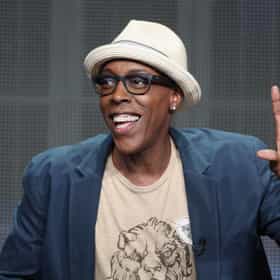 Arsenio Hall (born February 12, 1956) is an American comedian, talk show host, actor, writer and producer. He is best known for hosting The Arsenio Hall Show, a late-night talk show that ran from 1989 until 1994, and again from 2013 to 2014. Other television shows and films Hall has appeared in are Martial Law, Star Search (host), Coming to America (1988), and Harlem Nights (1989). Hall is also known for his appearance as Alan Thicke's sidekick on the talk show Thicke of the Night. In 2012, Hall won NBC's reality-competition game show Celebrity Apprentice 5. ... more on Wikipedia

Arsenio Hall is ranked on...

#94 of 150 Who Do You Wish Would Guest Star on the Muppet Show? 7.8k VOTES Following their brand-new big screen Disney adventure, "The Muppets," Jim Henson's stable of beloved felt characte...
#20 of 22 The Best Male Stand Up Comedians of the '80s 4k VOTES These men are some of the best 80s comedians, all of whom were inspired by the 1970s generation of comics, but made stand up...
The Locations of All Hollywood Walk of Fame Stars 419.8k VIEWS A list of stars on the Hollywood Walk of Fame, with photos. This list includes all television and movie stars. Acquiring a s...
Famous People Whose Last Name Is Hall 9.2k VIEWS Being a fairly common name, it's no surprise there are a lot of famous people with the last name Hall. Do you recognize all ...
Famous People Who Voiced Cartoon Characters 4.9M VIEWS   Everyone knows that Walt Disney, Mel Blanc, and Dan Castellaneta have provided the voices to iconic cartoon charact...
Celebrities Who You Probably Never Noticed Have Wonky Eyes 3.3M VIEWS Strabismus is a condition that affects the alignment of the eyes, causing a person to look cross-eyed or walleyed. Strabismu...
American Stand-Up Comedians: The Best Comics In the USA 170.3k VIEWS American comedians are some of the top rated stand up comedians in the world. These are the greatest stand up comedians this...
Celebrity Lakers Fans 302.9k VIEWS Go team! This is a list of celebrity Lakers fans, ranked by fame and popularity. The Los Angeles Lakers basketball team has ...
20 Famous ESFPs 96.5k VIEWS Many famous actors, musicians and politicians are believed to be ESFPs (Extraverted Sensing Feeling Perceiving). ESFPs are k...

Arsenio Hall is also found on...