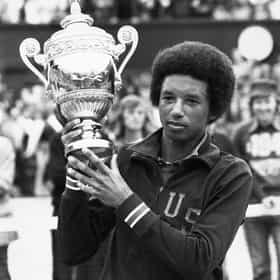 Arthur Robert Ashe Jr. (July 10, 1943 – February 6, 1993) was an American professional tennis player who won three Grand Slam titles. Ashe was the first black player selected to the United States Davis Cup team and the only black man ever to win the singles title at Wimbledon, the US Open, and the Australian Open. He retired in 1980. He was ranked World No. 1 by Harry Hopman in 1968 and by Lance Tingay of The Daily Telegraph and World Tennis Magazine in 1975. In the ATP computer rankings, he peaked at No. 2 in May 1976.In the early 1980s, Ashe is believed to have contracted HIV from a blood transfusion he received during heart bypass surgery. Ashe publicly announced his illness in ... more on Wikipedia

Arthur Ashe is ranked on...

Arthur Ashe is also found on...