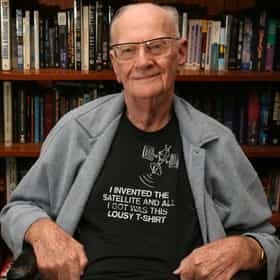 Sir Arthur Charles Clarke (16 December 1917 – 19 March 2008) was a British science fiction writer, science writer and futurist, inventor, undersea explorer, and television series host. He co-wrote the screenplay for the 1968 film 2001: A Space Odyssey, one of the most influential films of all time. Clarke was a science writer who was an avid populariser of space travel and a futurist of uncanny ability. He wrote over a dozen books and many essays for popular magazines. In 1961 he received the Kalinga Prize, a UNESCO award for popularising science. Clarke's science and science fiction writings earned him the moniker "Prophet of the Space Age". His science fiction earned him a ... more on Wikipedia

Arthur C. Clarke is ranked on...

#407 of 1,472 The Greatest Minds of All Time 741k VOTES List of the Greatest Minds of All Time, throughout history. This list represents the most influential thinkers across variou...
#815 of 2,830 The Most Influential People of All Time 2.4M VOTES This is a list of the most influential people of all of human history. This means that the individuals on this list have had...
Famous People Named Arthur 24.7k VIEWS List of famous people named Arthur, along with photos. How many celebrities named Arthur can you think of? The famous Arthur...
Famous People Who Use Initials In Their Names 77k VIEWS Sometimes, people decide that they want to be called by their initials instead of their full names. Here is a list of famous...
Famous People Whose Last Name Is Clarke 2.5k VIEWS Being a fairly common name, it's no surprise there are a lot of famous people with the last name Clarke. Do you recognize al...
104 Celebrities Who Have Entire Species Named After Them 62.4k VIEWS A list of organisms, including animals as well as plants, bacteria, etc., named for celebrities and other famous people (but...