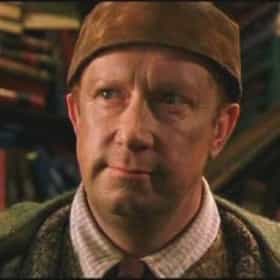 Arthur Weasley is a fictional character in the Harry Potter book series written by J. K. Rowling. The character is the patriarch of the Weasley family and married to Molly Weasley with whom he has seven children: Bill, Charlie, Percy, Fred, George, Ron, and Ginny. He is most probably the son of Septimus and Cedrella (nￃﾩe Black) Weasley. Interestingly enough, this makes him a descendant of the wealthy and aristocratic House of Black, but his mother was disinherited for marrying into a family of wizards who were "blood traitors". The evidence for this is Sirius Black's comment that Arthur is his second cousin once-removed, combined with the Black family tree as drawn by

Arthur Weasley is ranked on...

#560 of 3,792 The Best Movie Characters of All Time 1M VOTES List of the best movie characters of all time, ranked by film buffs and people like you. This list includes performances by ...
#18 of 21 Every Patronus In 'Harry Potter,' Ranked By How Much You Wish It Was Yours 8.1k VOTES After sorting out how you feel about which Hogwarts house you're in and waving hello to whatever wand chooses you, cong...
#21 of 114 People who voted for Arthur Weasley... also upvote Remus Lupin on The Very Best Teachers at Hogwarts, Ranked also upvote Harry Potter Franchise on The Most Rewatchable Movies The Greatest Harry Potter Characters, Ranked 270.9k VOTES The top Harry Potter characters come from a rich universe crafted on the page and adapted to the screen, giving us some of t...
#18 of 34 The Best Members of Gryffindor 2.5k VOTES Who is the best and bravest Gryffindor from the Harry Potter franchise? There may be differences between the Harry Potter bo...
The Cast of Harry Potter: Where Are They Now? 5M VIEWS When J.K. Rowling’s wildly-popular and bestselling Harry Potter book series was adapted for the screen, fans finally got to ...
#2 of 84 Fictional Characters Named Arthur 974 VOTES List of notable fictional characters whose name is Arthur, including photos when available. The fictional characters named A...

Arthur Weasley is also found on...