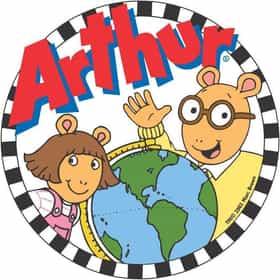 Arthur is a Canadian/American animated educational television series for children, created by Cookie Jar Group and WGBH for the Public Broadcasting Service. The show is set in the fictional American city of Elwood City, and revolves around the lives of 8-year-old Arthur Read, an anthropomorphic aardvark, his friends and family, and their daily interactions with each other. The television series is based on the Arthur book series, which are written and illustrated by Marc Brown. WGBH Boston along with Cinar began production of the animated series in 1994, and aired its first episode on September 2, 1996. Since its debut, the show has broadcast 209 30-minute long episodes, and its 18th ... more on Wikipedia

Shockingly Dark 'Arthur' Fan Theories 5.1k votes Arthur is undoubtedly one of the most beloved PBS shows, but is there something sinister hiding beneath the surface of this ...
All Arthur Characters, Ranked Best to Worst 2.9k votes Who is the best Arthur character? Here's our full ranked Arthur characters list with photos and character bios when availabl...
The Best Arthur Episodes of All Time 2.5k votes List of the best Arthur episodes, as voted on by other fans of the series. With so many memorable episodes of the show, it's...

Arthur is ranked on...

Arthur is also found on...