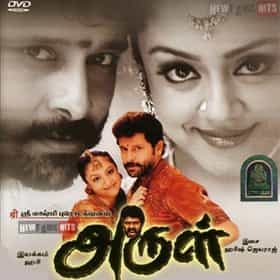 Arul is a 2004 Indian Tamil action film written and directed by Hari starring Vikram, Jyothika, Pasupathy, Vadivelu, Sarath Babu, Vinu Chakravarthy and Vaiyapuri. The music is composed by Harris Jayaraj. The story tells how a man is rejected by his family but then finds his way back. The film opened to mixed reviews from both critics as well as audience. The film was dubbed in Telugu as Arulapodu and in Hindi as Main Balwaan. ... more on Wikipedia

Arul is ranked on...

Arul is also found on...