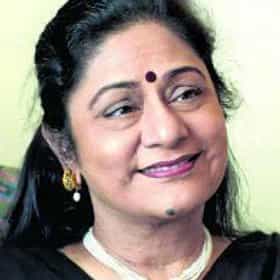 Aruna Irani (born 18 August 1946) is an Indian actress who has acted in over 300 films in Hindi, Kannada, Marathi and Gujarati cinema, mostly playing supporting and character roles. She has danced in the songs Thoda Resham Lagta Hai from the film Jyoti (1981), Chadti Jawani Meri Chaal Mastani, Dilbar Dilse Pyare, and Ab Jo Mile Hai from the film Caravan (1971); and "Main shayar to nahi" from the film Bobby (1973). Her performances won her a nomination at Filmfare Awards for Best Supporting Role. She holds the record for winning the most nominations (10), in this category, and received the award twice for her roles in Pet Pyaar Aur Paap (1985) and Beta (1993). In January 2012, ... more on Wikipedia

Aruna Irani is also found on...