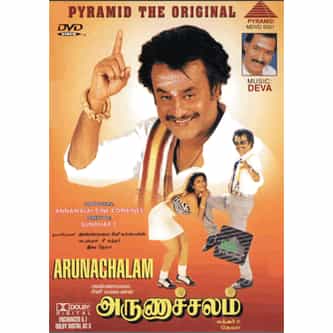 Arunachalam is a 1997 Tamil drama film directed by Sundar C and written by Crazy Mohan. The film features Rajinikanth, Soundarya and Rambha in the lead roles, with Jaishankar and Ravichandran in other pivotal roles. The soundtrack and background score for the film was composed by Deva, while U. K. Senthil Kumar handled the cinematography. The basic plot has been inspired from the 1985 Hollywood film Brewster's Millions and the 1988 Naseeruddin Shah starrer Hindi film Maalamaal. The film ... more on Wikipedia

Arunachalam IS LISTED ON