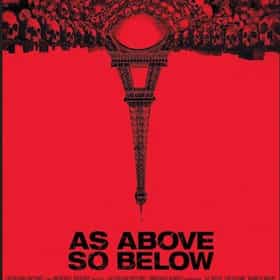 As Above, So Below

As Above, So Below is a 2014 American found footage horror film directed by John Erick Dowdle and written by Dowdle and his brother Drew. The film was produced by Legendary Pictures and distributed by Universal Pictures, making it the first film in Legendary's deal with Universal. It was released in selected theaters on August 22, 2014, and everywhere on August 29, 2014. The film stars Perdita Weeks, Ben Feldman, Edwin Hodge, François Civil, Marion Lambert, and Ali Marhyar. ... more on Wikipedia

As Above, So Below is ranked on...

#96 of 160 The Best Movies of 2014 66.1k VOTES Sure there are the Oscars, Golden Globes, and a number of other award ceremonies that hand out trophies to movies that are v...
#3 of 15 Movies That Will Drive Anyone With Claustrophobia To The Edge 3.2k VOTES Plenty of horror films have been described as "claustrophobic" over the years, but for people who actually experie...
#2 of 14 Pretty Good Horror Movies That Take Place In Caves And Underground 1.4k VOTES Small spaces, complete darkness, and terrifying figures combine to make underground horror movies seriously frightening. The...
#24 of 143 The Best Horror Movies Of The 2010s, Ranked 43.9k VOTES These horror films from the 2010s have got the best scares, screams, and monsters of the decade. Jordan Peele came onto the ...
#60 of 118 The Best Horror Movies of the 21st Century 26k VOTES A list of the Best Horror Movies of the 21st Century. Looking for some recently-made horror movies to enjoy? This list provi...
#216 of 505 The Scariest Movies Ever Made 549.3k VOTES These are the all-time scariest movies ever made. Many of these movies have become part of the pop culture lexicon due to th...
#3 of 38 The Best Horror Movies of 2014 4.1k VOTES Audiences all across the country (and the globe) were frightened in theaters in 2014, thanks to the best horror movies out...
#4 of 10 The Best Movies About Caves 1.2k VOTES Here's a list of the best cave movies ever made, ranked by movie fans with film trailers when available. This caving mo...
#1 of 12 The Best Horror Movies Set in Paris 30 VOTES With beautiful landmarks like the Eiffel Tower, the Louvre, and the Arc de Triomphe, you probably don't associate the &...