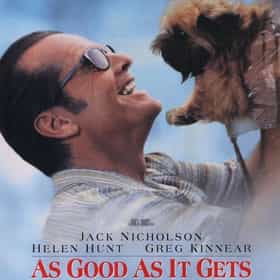 As Good as It Gets is a 1997 American romantic comedy film directed by James L. Brooks and produced by Laura Ziskin. It stars Jack Nicholson as a misanthropic, homophobic, racist, obsessive-compulsive novelist, Helen Hunt as a single mother with a chronically ill son, and Greg Kinnear as a gay artist. The screenplay was written by Mark Andrus and James L. Brooks. Nicholson and Hunt won the Academy Award for Best Actor and Academy Award for Best Actress, respectively, making As Good As It Gets the most-recent film to win both of the lead acting awards, and the first since 1991's The Silence of the Lambs. It is ranked 140th on Empire magazine's "The 500 Greatest Movies of All ... more on Wikipedia

As Good as It Gets is ranked on...

As Good as It Gets is also found on...