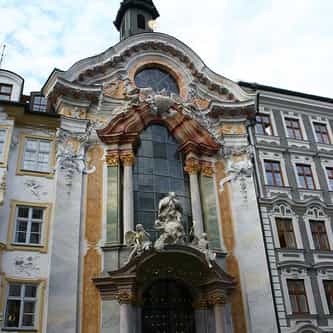 St. Johann Nepomuk, better known as the Asam Church is a church in Munich, southern Germany, built from 1733 to 1746 by the brothers Egid Quirin Asam and Cosmas Damian Asam as their private church. Due to resistance of the citizens, the brothers were forced to make the church accessible to the public. The church is considered to be one of the most important buildings of the main representatives of the southern German Late Baroque. ... more on Wikipedia

Asamkirche, Munich IS LISTED ON