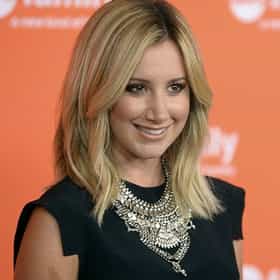 Ashley Michelle Tisdale (born July 2, 1985) is an American actress, singer, and producer. During her childhood, Tisdale was featured in over 100 advertisements and had minor roles in television and theatre. She achieved mainstream success as Maddie Fitzpatrick in the Disney Channel series The Suite Life of Zack & Cody. This success was heightened when she starred as Sharpay Evans in the High School Musical franchise. The film series proved to be a huge success for Disney and earned a large following. The success of the films led to Tisdale signing with Warner Bros. Records, releasing her debut album, Headstrong (2007), through the label. The album was a commercial success, earning ... more on Wikipedia

Ashley Tisdale is ranked on...

#98 of 230 People who voted for Ashley Tisdale... also upvote Carmen Electra on The Most Beautiful Women In Hollywood The Greatest New Female Vocalists of the Past 10 Years 1.8M VOTES The greatest female vocalists of the 2000s from all over the globe duke it out to see who has the best voice. While every ...
#230 of 1,027 People who voted for Ashley Tisdale... People under 30 are 2x more likely to vote for this The Most Beautiful Women In Hollywood 4.5M VOTES The most beautiful women in the world are a great mix of attractive TV actresses, singers, models, and more, ...
#983 of 1,042 Celebrity Death Pool 2020 72.4k VOTES They may be beloved performers, award winners, or game changers, but no matter how famous, you can’t escape death. This cele...
#419 of 1,582 The Most Beautiful Women in the World 5.7M VOTES Naming the most beautiful women in the world is a difficult task because of how subjective it is. Beauty is a mixture of phy...
#9 of 13 Celebrities You Never Realized Made Their Own Makeup Tutorials 285 VOTES Gone are the days when celebrities bragged about their glam squads. Spending hours a day in hair and makeup i...
#98 of 105 The Top Celebrity Fashion Icons of All Time 57.2k VOTES List of celebrity fashion icons. From Twiggy to Prince, and Oscar Wilde to Cate Blanchett, celebrities often have a ver...
#16 of 31 Twitter Rankings: Top Twitter Celebrities 3.2k VOTES You can't be best friends with them in real life, but thanks to the micro blogging service Twitter, you can follow the celeb...
#106 of 266 Who Should Be in the 2012 Maxim Hot 100? 113.8k VOTES Maxim Magazine is accepting votes for their 2012 Hot 100 list, but I want to hear what the Ranker Community has to say. Use ...
#170 of 415 Maxim's Nominees for the 2015 Hot 100 191.4k VOTES Here are Maxim's nominees for the 2015 hot 100. This is the issue of Maxim that gentlemen around the world look forward to m...
#51 of 104 Who Was America's Girlfriend in 2015? 69.5k VOTES America's girlfriend?! What the heck does that mean? Well, it's simple really. It's just the best gal pal of all of America ...
Hilarious Ways Celebrities Have Tried To Avoid The Paparazzi 3.5M VIEWS So your feature length debut premiered on Netflix or your latest single is geared to be the next "s...
Famous Cancer Female Celebrities 62.9k VIEWS Comfortable surfing the ebb and flow of emotion and weaving their feelings into their creativity, those born under the sign ...
#15 of 48 The Best Celebrity Vlogs On YouTube 11.3k VOTES From Hollywood to YouTube, here are the best celebrities who have YouTube channels. Unlike the most popular Y...
70+ Famous People with Porsches 225.1k VIEWS List of Famous People with Porsches ranked by fame and popularity. It's no secret that celebrities love to drive nice cars a...
70+ Celebrities Who Do Yoga 93.4k VIEWS Yoga is a physical, mental and spiritual exercise that strengthens your body and soul. Many famous actors, musicians, and pr...
Where Are They Now: High School Musical Edition 161k VIEWS In 2006, Disney was churning out more popular tween series than your average AIM-addicted 14-year-old could keep up with. Th...
Celebrity Couples With Major Height Differences 44 VIEWS Celebrity couples come in all shapes and sizes. Some have a large age gap, while others have a large height difference....

Ashley Tisdale is also found on...