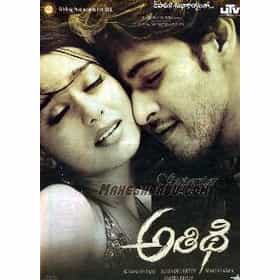 Athidhi or Atithi is a 2007 Telugu action thriller film starring Mahesh Babu and Amrita Rao, directed by Surender Reddy and produced by G. Ramesh Babu, brother of Mahesh Babu under their banner Krishna Pictures Private Limited. It was released on 18 October 2007. It was dubbed into Tamil as Thani Kaattu Raja, and into Hindi as International Khiladi:The Iron Man.Athidi was released with 500 Prints in 820 Theaters all over the world. Athidi collected a Share of 28 crore in its lifetime. Athidi finished 35 Days in 400 Centres successfully.It collected 35 crore gross in 4 weeks. It is being remade in Bengali as Royal with Hiran and Sayantika Banerjee. ... more on Wikipedia

Athidhi is also found on...