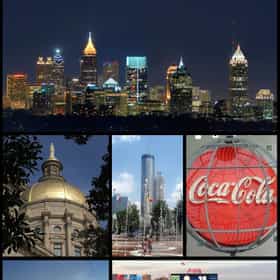 Atlanta is the capital of and the most populous city in the US state of Georgia, with an estimated 2013 population of 447,841. Atlanta is the cultural and economic center of the Atlanta metropolitan area, home to 5,522,942 people and the ninth largest metropolitan area in the United States. Atlanta is the county seat of Fulton County, and a small portion of the city extends eastward into DeKalb County. Atlanta was established in 1837 at the intersection of two railroad lines, and the city rose from the ashes of the Civil War to become a national center of commerce. In the decades following the Civil Rights Movement, during which the city earned a reputation as "too busy to ... more on Wikipedia

The Best Rappers From Atlanta 31.5k votes From new artists to some of the greatest hip hop artists of all time, here are the best rappers from Atlanta. Including both...
12 Creepy Ghost Stories And Haunted Locations From Atlanta, Georgia 31.3k views When thinking of Georgia, people may think of gorgeous landscapes and peaches, but there’s an undeniably horrific past full ...
The Best Characters on FX's Atlanta, Ranked 404 votes These are the best characters on FX's Atlanta, ranked by viewers and fans. Ranked from best to worst, the list of Atlanta ch...

Atlanta is ranked on...

Atlanta is also found on...

Forbes' Traveller List: 30 Most Visited Cities in US Bad Road Rage: U.S. Cities With The Worst Road Rage US Cities With Skate Parks & Skate Spots US Cities with the Worst Highway Bottlenecks in America