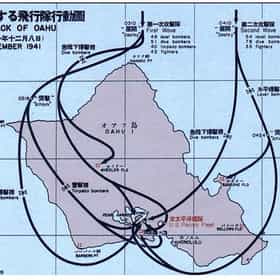 The attack on Pearl Harbor was a surprise military strike conducted by the Imperial Japanese Navy against the United States naval base at Pearl Harbor, Hawaii, on the morning of December 7, 1941. The attack led to the United States' entry into World War II. The attack was intended as a preventive action in order to keep the U.S. Pacific Fleet from interfering with military actions the Empire of Japan was planning in Southeast Asia against overseas territories of the United Kingdom, the Netherlands, and the United States. There were simultaneous Japanese attacks on the U.S.-held Philippines and on the British Empire in Malaya, Singapore, and Hong Kong. From the standpoint of the ... more on Wikipedia

lists about Attack on Pearl Harbor

How Pearl Harbor Is Taught In Japanese Schools 207k views Have you ever wondered how the Pearl Harbor attacks are taught in Japan? What do Japanese students really learn about Pearl ...
What Happened Immediately After The Attack On Pearl Harbor? 2.9k views On December 7, 1941, Japan attacked the US at Pearl Harbor in Hawaii. The attack claimed more than 2,400 American lives and ...
All The Historical Inaccuracies In Michael Bay's 'Pearl Harbor' 47.6k views No one goes to watch a Michael Bay movie expecting historical accuracy. But the chasm between Pearl Harbor the movie and rea...

Attack on Pearl Harbor is ranked on...

#4 of 75 The Most Important Battles in US History 35.9k VOTES The most significant major battles in American history, ranked by everyone. Anyone can vote on this list, making these ranki...
The Most Widely Believed Conspiracy Theories in US History 219.4k VIEWS Conspiracy theorists: Call them birthers, deathers or conspiracists. There are many, people who buy into these popular ...
Historical Events That Happen In The 'Watchmen' Universe 10.6k VIEWS Alan Moore and Dave Gibbons's Watchmen can be considered a fairly thorough guide to 20th-century history, using nu...

Attack on Pearl Harbor is also found on...