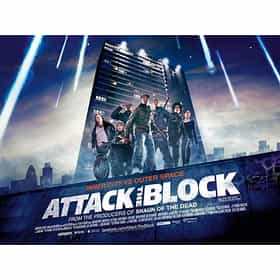 Attack the Block is a 2011 British science fiction comedy film. The film was written and directed by Joe Cornish and stars Jodie Whittaker, John Boyega, Nick Frost and Luke Treadaway. Attack the Block is set on a council estate in South London on Guy Fawkes Night, and, with some coming of age themes, the plot centres on a teenage street gang who have to defend themselves from predatory alien invaders. Released on 11 May 2011, the film achieved significant popularity, favorable critical reviews, and accolades internationally. The film has been listed as a cult film in the making by a significant number of websites. ... more on Wikipedia

Attack the Block is ranked on...

Attack the Block is also found on...