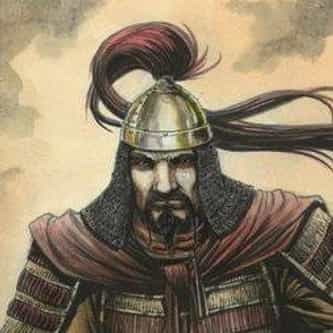 Attila (; fl. c. 406–453), frequently called Attila the Hun, was the ruler of the Huns from 434 until his death in March 453. He was also the leader of a tribal empire consisting of Huns, Ostrogoths, and Alans among others, in Central and Eastern Europe. During his reign, he was one of the most feared enemies of the Western and Eastern Roman Empires. He crossed the Danube twice and plundered the Balkans, but was unable to take Constantinople. His unsuccessful campaign in Persia was ... more on Wikipedia

lists about Attila the Hun

76.2k readers Things You Didn't Know About Attila the Hun

Attila the Hun IS LISTED ON

#166 of 2,437
2.5M VOTES The Most Influential People of All Time
#7 of 410
126k VOTES The Most Important Military Leaders in World History Men are 3x more likely to vote for this
#5 of 30
29.2k VOTES The 30 Biggest Badasses In History
#15 of 350
991.7k VOTES The Most Important Leaders In World History
#8 of 20
233.2k VOTES Historical Figures And The Actors Who Should Portray Them In A Biopic
82.6k VIEWS All Of The Real Historical Parallels To 'Game Of Thrones'
37.4k VIEWS The 13 Most Formidable Enemies The Roman Empire Ever Faced
4.4k VIEWS 12 Historical Figures Whose Tombs Have Not Been Found
13.8k VIEWS What Historic Military Leader Would You Be Based On Your Zodiac?
44.1k VIEWS Famous People Who Choked to Death
Famous People From Hungary Famous People Who Died in Ukraine