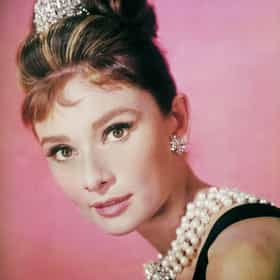 Audrey Hepburn (born Audrey Kathleen Ruston; 4 May 1929 – 20 January 1993) was a British actress and humanitarian. Recognised as a film and fashion icon, Hepburn was active during Hollywood's Golden Age. She was ranked by the American Film Institute as the third-greatest female screen legend in Golden Age Hollywood, and was inducted into the International Best Dressed List Hall of Fame. Born in Ixelles, Brussels, Hepburn spent her childhood between Belgium, England, and the Netherlands. In Amsterdam, she studied ballet with Sonia Gaskell. She moved to London in 1948, where she continued her ballet training with Marie Rambert. She began performing as a chorus girl in West End musical ... more on Wikipedia

Audrey Hepburn is ranked on...

Audrey Hepburn is also found on...