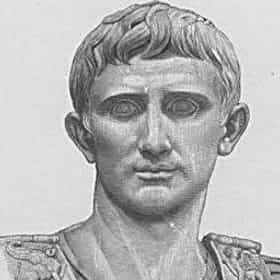 Augustus (Latin: Imperator Caesar Divi filius Augustus; 23 September 63 BC – 19 August AD 14) was a Roman statesman and military leader who was the first emperor of the Roman Empire, reigning from 27 BC until his death in AD 14. His status as the founder of the Roman Principate has consolidated an enduring legacy as one of the most effective and controversial leaders in human history. The reign of Augustus initiated an era of relative peace known as the Pax Romana. The Roman world was largely free from large-scale conflict for more than two centuries, despite continuous wars of imperial expansion on the Empire's frontiers and the year-long civil war known as the "Year of the Four ... more on Wikipedia

Augustus is ranked on...

#300 of 926 People We Wish Were Still Alive 3.3M VOTES RIP to our world's greatest achievers, those who changed the way we live and the ways we thought. This list of people we wis...
#112 of 473 Famous Role Models We'd Like to Meet In Person 536.1k VOTES These are the famous folks it would be most exciting to meet in person, as ranked by the wisdom of the crowd. Some of the be...
#360 of 411 The Most Important Military Leaders in World History 113.8k VOTES Military history has a few figures who didn't just win battles or campaigns, but changed the world and the destiny of their ...
#67 of 1,472 The Greatest Minds of All Time 739.3k VOTES List of the Greatest Minds of All Time, throughout history. This list represents the most influential thinkers across variou...
#10 of 378 The Most Important Leaders In World History 946.1k VOTES For good or for bad, our leaders can be powerful forces for change in the world. But who are the most impaction people to ev...
#8 of 22 This Artist Creates Vivid Reimaginings Of Historical Figures In Modern Styles 6.6k VOTES It's fun to imagine: what were historical figures really like? How would they fit in the modern world? How would we rea...
#5 of 13 13 Historical Figures Who Look Exactly Like Modern Celebrities 3.3k VOTES They say history repeats itself. They also say each of us has a doppleganger, someone roaming the planet at this very moment...
#6 of 19 Historical Figures Who Were Accomplishing Feats Of Greatness A Lot Younger Than You Thought 150 VOTES Some of history's most notable individuals were high achievers at a surprisingly young age. Many of the men and women on thi...
Famous People Named Augustus 1.8k VIEWS Ever wondered how many famous people named Augustus there are? This list of celebrities named Augustus includes photos and i...

Augustus is also found on...