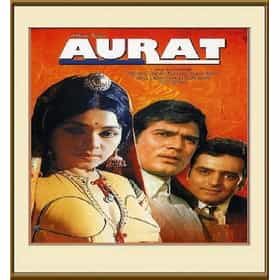 Aurat is a 1967 Hindi movie produced and directed by S. S. Balan and S. S. Vasan. The film stars Padmini, Pran, Rajesh Khanna, Feroz Khan, Kanhaiyalal, David, O. P. Ralhan, Nazima, Lalita Pawar and Leela Chitnis. The films music is by Ravi.The film is totally revolving around character of Parvati's life played by Padmini. The film deals with how Parvati, who is in true love with character played by Feroz Khan, is forced by circumstances to marry Manoharilal against wishes of her brother and later is tested by life to show whether after marriage to Manoharilal, she is truly affectionate to Manoharilal or is she having affair with the her ex-boyfriend. This movie is the remake of 1966 ... more on Wikipedia

Aurat is ranked on...

Aurat is also found on...