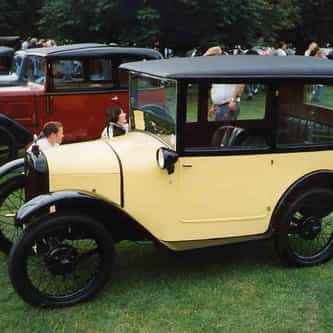 The Austin 7 was an economy car produced from 1922 until 1939 in the United Kingdom by the Austin Motor Company. Nicknamed the "Baby Austin", it was one of the most popular cars ever produced for the British market, and sold well abroad. It wiped out most other British small cars and cyclecars of the early 1920s; its effect on the British market was similar to that of the Model T Ford in the US. It was also licensed and copied by companies all over the world. The very first BMW ... more on Wikipedia