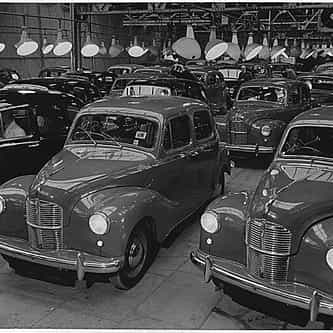 The A40 Devon are automobiles marketed by the Austin Motor Company from 1947 to 1952 – the first post-war saloons to be produced by Austin – featuring a mix of old and new technologies. They were previewed by the UK press at the Paris Motor Show on 22 October 1947, who expressed immediate disappointment at the car's conservative appearance. More than 450,000 were built before the model's replacement in 1952 by the Austin A40 Somerset. ... more on Wikipedia