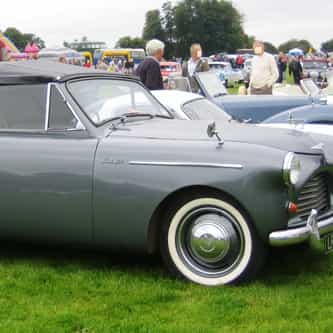 The Austin A40 Sports debuted at the 1949 London Motor Show as a four-passenger, aluminium-bodied convertible version of the Austin A40 – carrying an Austin of England nameplate, bearing the marque's Flying A hood ornament, and designed and manufactured in conjunction with Jensen Motors. Production of the A40 Sports, which was intended as a sporty touring car rather than a true sports car, began in November 1950 for model year 1951. By the time production ended in 1953, approximately 4,011 ... more on Wikipedia