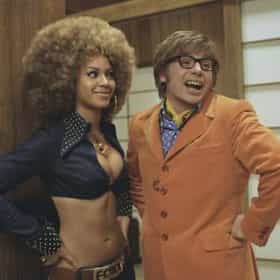 Sir Augustine Danger "Austin" Powers, KBE, is a fictional character from the Austin Powers series of films, and is created and portrayed by Mike Myers. He is the protagonist of Austin Powers: International Man of Mystery, The Spy Who Shagged Me and Austin Powers in Goldmember. He is a womanizing, hard-partying British spy embodying the Swinging London mod culture and hippie culture of the 1960s who, with his nemesis Dr. Evil, was frozen in a cryogenics experiment. The series' humor follows his attempts to adjust to the modern world as he continues to try to save it from terrorism. ... more on Wikipedia

Austin Powers is ranked on...

#73 of 3,792 People who voted for Austin Powers... People Age 30 to 49 are 2x more likely to vote for this also upvote Star Wars Franchise on The Best Movies of All Time The Best Movie Characters of All Time 1M VOTES List of the best movie characters of all time, ranked by film buffs and people like you. This list includes performances by ...
#201 of 818 People who voted for Austin Powers... Women are 2x more likely to vote for this The Most Annoying TV and Film Characters Ever 1.5M VOTES You know them. You hate them. Honestly, who knows why these characters even exist. Did someone think they were funny? M...
#22 of 44 The Best Fictional Characters Who Time Travel 9.9k VOTES Time travel is an extremely interesting subject in fiction because it deals with a myriad of themes and issues. Traveling ...
#18 of 19 Beloved Movie Characters Who Should Make a Comeback 2.3k VOTES What beloved and iconic movie characters would you like to see make their long-awaited return to the big screen? There ...
#24 of 120 The Best Fictional Spies, Ranked 5.1k VOTES List of famous fictional spies with pictures where possible. Who are the best fictional spies? Famous spies, especially fema...
#5 of 22 Kid Versions of Adult Actors All Grown Up 489.6k VOTES Sometimes casting directors just flat out nail it when it comes to kid versions of adult actors. They're the choices that ma...
#33 of 37 The Greatest Bangs in Movie History 10.7k VOTES Bangs. Fringe. Whatever you call it, that hair that hangs down over your forehead can be real hit or miss. People either lov...
Parodies That Are Way More Popular Than The Thing They're Parodying 134k VIEWS What happens when popular parodies stop being parodies? Do parodies more popular than their subject cease to be funny, or ar...
#2 of 29 The Best Characters in the Austin Power Movies, Ranked 2.1k VOTES Yeah, baby, yeah! We're ranking the greatest characters in the Austin Powers franchise. From International Ma...
#3 of 23 The Best Mike Myers Characters of All Time 1k VOTES Mike Myers characters list, ranked from best to worst with clips from the movie when available. These Mike Myers roles inclu...
#4 of 19 The Funniest Spy Movie Characters 225 VOTES If we had to guess, the split between serious spy movies and funny spy movies (or flat-out dumb spy movies) has to be pretty...

Austin Powers is also found on...