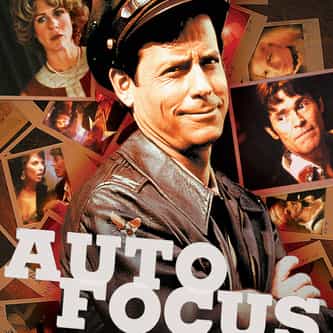 Auto Focus is a 2002 American biographical film directed by Paul Schrader, starring Greg Kinnear and Willem Dafoe. The screenplay by Michael Gerbosi is based on Robert Graysmith's book The Murder of Bob Crane. Auto Focus tells the story of actor Bob Crane, an affable radio show host and amateur drummer who found success on Hogan's Heroes, a popular television sitcom about a prisoner of war camp during World War II, and his dramatic descent into the underbelly of Hollywood after the series ... more on Wikipedia

Auto Focus IS LISTED ON