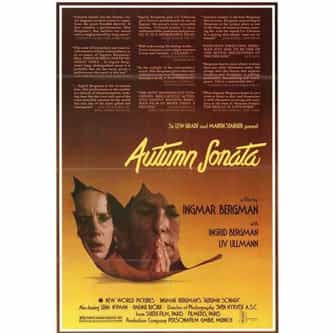 Autumn Sonata is a 1978 Swedish drama film written and directed by Ingmar Bergman, starring Ingrid Bergman, Liv Ullmann and Lena Nyman. It tells the story of a celebrated classical pianist who is confronted by her neglected daughter. It was Ingrid Bergman's last performance in a major theatrical feature film. Autumn Sonata was Ingmar's last film made for the cinema; all his films from this point, even those which received theatrical release, were television productions. ... more on Wikipedia

Autumn Sonata IS LISTED ON