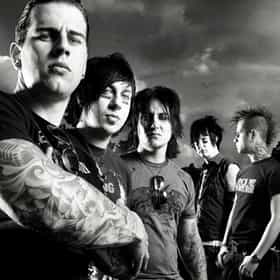 Avenged Sevenfold is an American heavy metal band from Huntington Beach, California, formed in 1999. The band's members are lead vocalist M. Shadows, rhythm guitarist and backing vocalist Zacky Vengeance, lead guitarist and backing vocalist Synyster Gates, bass guitarist Johnny Christ and drummer Arin Ilejay. They are known for their diverse rock sound and dramatic imagery in album covers and merchandise. Avenged Sevenfold emerged with a metalcore sound on their debut Sounding the Seventh Trumpet but their style had evolved by their third album and first major label release, City of Evil, into a hard rock/heavy metal sound. The band continued to explore new sounds with their ... more on Wikipedia

Avenged Sevenfold is ranked on...

#476 of 2,187 The Greatest Musical Artists of All Time 13.4M VOTES When VH1 polled fellow artists to name the greatest artists of all time, it seemed like a good idea---but in reality, the li...
#72 of 358 The Worst Rock Bands of All Time 744.5k VOTES Here they are: the absolute worst rock bands in history, ranked from the most awful bands to the kind of okay but still pret...
#465 of 1,076 The Worst Bands & Musicians of All Time 1.3M VOTES The worst bands in music history, ranked by music fans (and haters.) This list contains the most awful bands to listen to fr...
#218 of 411 The Greatest Musical Artists of the '90s 1M VOTES   Take a big whiff- "mmmbop", it smells like the '90s in here! An incredibly eclectic decade for music, the...
#169 of 632 The Greatest Live Bands of All Time 330.1k VOTES List of the greatest live bands or artists of all time, created and ranked by music fans worldwide asks the question "w...
#1 of 32 The Best Bands Named After Things from the Bible 1.4k VOTES Biblical bands can be found in almost every genre of music. Plenty of bands have religious names – some intentionally, other...
#57 of 211 People who voted for Avenged Sevenfold... Women are 2x more likely to vote for this The Best Hard Rock Bands/Artists 195.3k VOTES Hard rock is a genre that started with bands like Cream, Mountain, Steppenwolf, and Grand Funk in the late 1960s and early 1...
#32 of 119 The Best Post-Grunge Band 10.9k VOTES After the grunge boom of the early 1990s, there were a slew of bands that emerged following that initial movement. The bands...
#14 of 182 The Best Modern Rock Bands/Artists 31.2k VOTES Modern rock artists list, with photos, ranked best to worst by votes. List of good modern rock bands includes a filter so yo...

Avenged Sevenfold is also found on...